If you know me at all, you’ll know that donuts are my thing. Jam filled, glazed, sugared you name it and I’m eating it. So it should come as no shock that I own not one, not two, but three silicone donut moulds and use them all fairly frequently!

Another you thing you probably know about me if you spend anytime around me at all is that I’m obsessed with The Great British Bake Off. I’ve watched every episode (some more than a few times) and I’m currently baking my  way through the technical challenges in order of appearance. But alongside that challenge, I’m also enjoying the community aspect of the show by joining in with the #GBBOTwitterBakeAlong group, which challenges bakers to bake one of the challenges presented on that week’s episode. This week, Biscuit Week, had three great challenges and one, the signature “Chocolate Biscuit Bar” just wouldn’t leave my head. 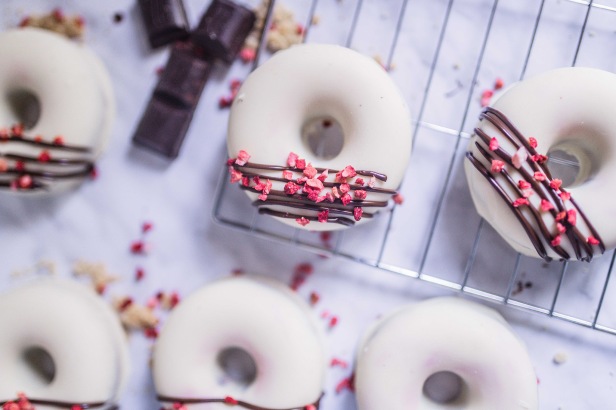 I knew I could assemble the bar in a mould, but…I didn’t want to buy one just for this baking challenge so I went with what I had, my trusty silicone donut mould. And thus, the Donut Biscuit Bars were born!

The recipe is fairly straight forward, requires a bit of patience, but not a lot of time. You could easily whip these up in just over an hour.  I used store bought marshmallow and strawberry jam but you could also make your own for a truly at home bake.

Directions:
1.  Melt white chocolate in a glass bowl over a gently simmer pot of water. Don’t let the water touch the bottom of the bowl. Once melted, use a pastry brush to brush the white chocolate onto the silicone mould. Make sure that the chocolate covers the entire inside of the mould, leaving no bare patches. Once fully covered, place in fridge to harden.

2. Make the Shortbread cookies.
– Preheat oven to 190C.  Meanwhile, cream the sugar and butter together with a hand mixer until creamy and smooth. Using a wooden spoon add in the flour until well mixed and dough forms. Transfer the dough onto a clean lightly floured surface and roll out to 1cm thickness. Using either donut cutter or a glass slightly smaller than the diameter of your donut mould, cut out circles of the dough. Then, using an icing bag tip, cut out holes in the center of the circle to form a ring.  Bake these biscuits for 15-20 minutes until lightly golden. Once baked, remove from the oven and cool on racks completely.

5. Melt the leftover white chocolate and spread a thick layer over the bottom of the biscuits, sealing them in chocolate. Place the moulds back in the fridge until the chocolate has completely set.

6. Once the chocolate has hardened, gently pop the donut biscuits out of the mould and place on a cooling rack. Melt the milk chocolate and gently drizzle over half the donuts. Sprinkle the freeze dried strawberries on top and enjoy!